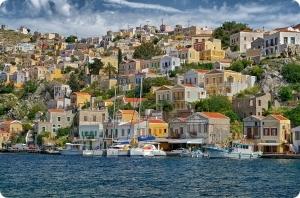 Sights of Greece are not only ancient monuments of architecture, but also its islands, occupying one-fifth of the country's area. Each island is a separate world, carefully storing its features and traditions. Island hopping in Greece is a wonderful opportunity to discover beautiful world of history, nature and local culture.

Kos Island has four ports, from which you can easily get to the nearby islands of Dodecanese group. The brightest ones, located near to Kos, - Nisyros, Kalymnos, Rhodes, Symi, Patmos. Each of them opens the traveler its own mysterious world, attracting the distant past and captivating the present.

Rhodes: island of the sun

Travel time from the port of Kos: from 2.5 hours.

Not far from the island of Kos is the fourth largest Greek island - Rhodes, the capital of the Dodecanese district. Lots of mythological stories and legends are associated with it. Popular attractions in Greece, known far beyond its borders, are located right here:

Travel time from the port of Kos: from 2.5 hours.

Patmos is one of the most important centers of Orthodox Christians around the world. On the island, John the Evangelist was exiled, where the revelation that formed the content of the Apocalypse descended upon the saint.

The most popular attractions in Greece are the monasteries. On the top of the island of Patmos there is the monastery of St. John the Theologian, storing valuable books and artifacts. Not far from it is the legendary cave of the Apocalypse, which is visited annually by thousands of pilgrims. The Zoodohu Convent, located in Skala village, is open to visitors. Here you can see the daily worries of nuns and pray in seclusion.

Travel time from the port of Kardamena: 1 hour.

A tiny island with a population of just 1,000 people makes a strong impression. This is one of those places where the traditions of the "old" Greece are alive. Villages with white houses and shutters, painted in blue, hang over the very crater of an active volcano or descend to the port. Here, as nowhere is felt the flow of time, frozen in the centuries.

Nisyros is struck by natural beauty - volcanic cliffs of black color, ascetic vegetation on the slopes of mountains and amazing beaches create a truly mesmerizing picture.

Be sure to visit the monastery of Panagia Spigliani and the local archaeological museum, try seafood and drink a local soft drink sumada.

See you in Symi!

Travel time from the port of Kos: 1.5 hours.

If you are thinking about what to see in Greece, feel free to go to the islands, they will not disappoint you for sure. The island of Symi with its neoclassical architecture resembles a watercolor painting by an artist.

Once the island was the capital of the Dodecanese and was more important than Rhodes itself. Now it is one of the small islands with a population of 3000 people in the capital, but keeping its amazing atmosphere of lightness.

From the local attractions, be sure to visit the Monastery of Taxiarch Panormiti, which gathers from all over Greece and from abroad.

The wild and wonderful island of Kalymnos

Travel time from the port of Mastichari: from 45 minutes.

Kalymnos is a discovery island, the pearl of the Dodecanese. Here you get a rich history, a pilgrimage to holy relics, a legacy of local painters, for those who prefer active leisure - rock climbing and diving are the visiting card of the island, beautiful beaches for every taste, from fine sand to large pebbles. And, of course, numerous family taverns offering local delicacies.

Must visit in Kalymnos:

Thinking about other Kos nearby destinations to visit, do not forget about the usual rest, every island has beautiful beaches and cozy bays that you can get around in a rented car.

All the sights of Greece are almost impossible to see. Even those who were born here again and again discover something new in their native Hellas. However, having holidays on the island of Kos, you will have the opportunity to see a lot of colorful islands nearby. And, when you are tired, go to some nice tavern - the Greeks like to eat deliciously and can cook no less delicious. Read about it here.

© All rights reserved, 2020
Design by Alternativa